Water Intrusion Concerns: EIFS Isn't What It Used to Be

While EIFS is commonly used as insulation on many buildings, it can be susceptible to failures related to water intrusion or condensation. In this article, you'll learn how these types of failures can happen and how to prevent them with regular maintenance.

A Primer on EIFS

Exterior Insulation and Finish System, or EIFS, is an exterior wall cladding system that consists of field-applied rigid foam insulation panels on the outside of a building's wall framing and sheathing, which is then coated with a relatively thin layer of synthetic stucco.

Architects and engineers have historically provided insulative materials between or inside structural elements. Contrarily, EIFS applies them to the exterior of the structure. Insulating a building from the exterior made EIFS the precursor to the Continuous Insulation strategies now common in building energy codes, especially in northern climates, and in buildings designed for higher energy efficiency.

EIFS is typically installed using one of two common methods:

When It Starts to Go Bad: Water Intrusion and Condensation

Since water is detrimental to buildings in so many ways, controlling water at the building exterior is of utmost importance. Compared to the barrier system, a drainage EIFS system is superior when it comes to water management and preventing water intrusion into the building when using this type of building envelope finish. However, drainage EIFS systems were not readily available in the United States until the mid-1990s, and then not added to the suite of International Building Codes until 2009.

The earliest iterations of EIFS were primarily barrier systems. When a barrier EIFS system was coupled with earlier versions of exterior sheathings, specifically paper-faced gypsum sheathings, it was particularly vulnerable to failure. Most notably, water intrusion and the multitude of consequential damage like loss of insulative value, structural deterioration, mold, and detachment of the EIFS cladding.

There are two main components of barrier EIFS system failures. First, water penetrates the barrier to the insulation and is then unable to escape. Then, the retained water begins to affect the exterior gypsum sheathing, causing moisture-related damage, degradation, and potential biological growth.

Improper and/or deferred maintenance can lead to water intrusion into the EIFS and the materials/substrate behind the EIFS. In barrier EIFS installations there is no WRB, thus infiltrating water has direct access to the exterior wall sheathing. If there are no flashings or other means for that water to escape from behind the EIFS, the water has nowhere to go. The water will instead be retained against, and eventually absorbed by, the exterior wall sheathing.

Exterior wall sheathings are made with water-repelling materials, including paper-faced exterior gypsum sheathing. However, these materials are not waterproof. They are generally more absorptive and vapor permeable than the insulation panel and cannot withstand recurring and/or prolonged moisture retention indefinitely.

In addition to water intrusion from the exterior, moisture can develop within the wall assembly for another reason: condensation. Vapour permeable walls with insufficient insulation are more susceptible to humidity condensing on the surfaces of the exterior wall sheathing and insulation panel. On its own, EIFS does not usually provide enough insulation, which is why condensation is a common issue.

Condensation can be caused either by warm, humid air from the outside encountering inner cladding surfaces that are cooled by interior air conditioning; or warm, humid air from a heated building interior encountering inner cladding surfaces that are being cooled by lower outside temperatures. This condensation issue tends to be exacerbated by thermal bridging when metal wall framing components are used.

Then It Falls Apart: Consequences of Exposure to Moisture

With time and recurring exposure to moisture, the EIFS itself is relatively unaffected – but it conceals the moisture damage that occurs to the gypsum sheathing behind it. This moisture damage can come in the form of:

In addition to incrementally increasing water intrusion into the wall assembly and the building interior, when the EIFS's attachment to the building is undermined, it's vulnerable to displacement from the wall from wind or other applied loads. Consequently, that area of removed EIFS, that is absent any WRB, has now become a breach in the building envelope that can allow direct water intrusion.

Moreover, when EIFS detaches from a building, it can cause additional dangers. Because the insulation panels of the EIFS assembly are held together by synthetic stucco and its embedded reinforcing mesh, a relatively large piece of building cladding (e.g. 50 square feet) can create safety concerns for people on the ground, as well as adjacent buildings and properties. Consider the severity of a piece of EIFS falling from about the 16th floor of a high-rise building in a downtown area. It's not a load of bricks, but it's also not feathers. 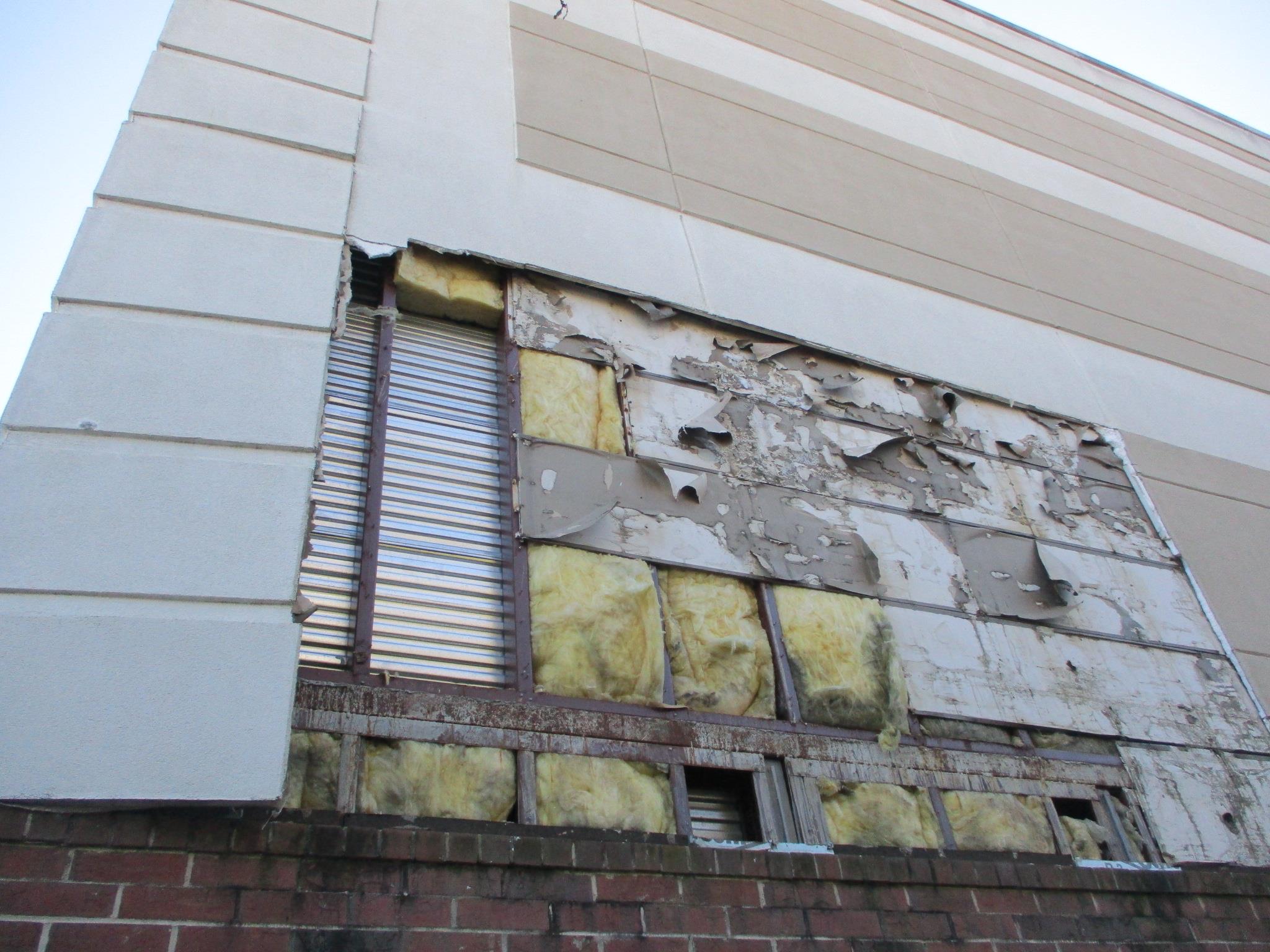 The same building after the EIFS has fallen off

What to Take Away: Preventing Failures and Future EIFS Improvements

This article is not intended to scare readers into avoiding buildings with EIFS as an exterior cladding. Instead, as a building owner or property manager, be sure to have EIFS cladding inspected and evaluated regularly. Especially if the installed EIFS dates from a time when barrier EIFS systems over paper-faced gypsum sheathing were common if such a configuration is installed on the subject building, and/or if you live in an area that gets lots of rain. The best offense is a good defense, and in this case, that's maintenance.

What to look for in an EIFS inspection:

You can take comfort in the fact that as buildings have aged, the EIFS industry, building professionals, and building code developers have been steadily improving EIFS as a cladding and minimizing the circumstances that lead to these types of failures.

Given the increasing reliance on EIFS for its energy efficiency advantages, all these improvements have been especially important. So, we can say with confidence that EIFS is here to stay.