Passenger Road Vehicle Event Data Recorders (EDR): What Are They and How Do They Benefit Motor Vehicle Claims?

The History of Event Data Recorders

If you have ever watched one of the many documentaries on the topic of air crash investigations, you will appreciate that the first components an investigator wants to locate at the crash scene are the flight data recorder and cockpit voice recorder, but have you ever considered why? Imagine you are the lead investigator and upon arrival at the crash scene, you are presented with wreckage strewn over large distances of many kilometers. The wreckage debris field pieces range in size from whole panel sections to small brackets, broken switch panels, and luggage. How are you going to put all these pieces together to understand what happened, why it happened, and how it happened? For an air crash, the flight data recorder and cockpit voice recorder may contain the vital data elements which will help you to piece the entire investigation together. Conversely, a car crash is not all that different.

The National Highway Traffic Safety Administration (NHTSA) in the United States defines an event data recorder (EDR) as, "a device or function in a vehicle that records the vehicle’s dynamic time-series data during the period just prior to a crash (e.g. vehicle speed vs. time) or during a crash event (e.g. delta-v vs. time), intended for retrieval after the crash event. For the purposes of this definition, the event data do not include audio and video data."

The earliest use of EDRs in road vehicles dates to the early 1980s when the tachograph was first introduced into commercial heavy vehicles. Heavy vehicle EDRs focused on engine and braking data, amongst others. Passenger vehicle manufacturers developed their own EDRs for engine data but with the growing demand for occupant protection and safety, focus was placed upon supplemental restraint systems (SRS), which includes airbags.

Modern passenger vehicles comprise complex electronic control systems and data communication networks. Thousands of messages and data elements are transmitted throughout the vast array of wiring, connectors, and "black box" modules, which translate commands from the vehicle operator into the actions taken by the vehicle to get you to your destination safely. The airbag control module is just one of these "black box" items whose responsibility it is to sense the magnitude of a crash event, predict the level of injury likely to be inflicted upon the vehicle occupants, and, if necessary, deploy airbags with intent to minimize the risk of serious injury to the head, neck, and chest of occupants as far as possible. To make matters more difficult, the airbag control module must complete all of this in about one-fifth of the time it would take you to blink an eye.

What Data is Recorded?

In the United States, every new passenger vehicle manufactured after September 1, 2012, is required to contain an EDR, which complies with Title 49 CFR Part 563 (2011). This regulation mandates the data elements, which at a minimum, the EDR must attempt to record. 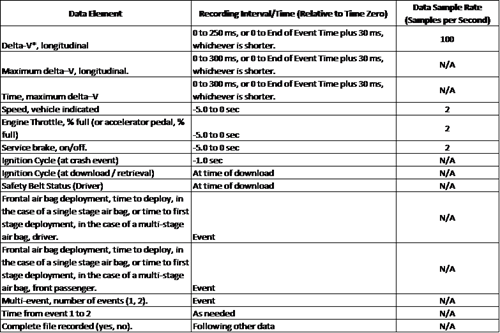 *Delta-V means the cumulative change in velocity (speed in each direction) as recorded by the EDR.

In addition to this minimum data element set, there are other data elements that must be recorded under specified conditions. These may include structural acceleration, ABS activity, engine speed, steering input, stability control, vehicle roll angle, seat track position, occupant size classification, pretensioner, and side airbag deployment times. Depending on the amount of available memory and the processing speed capability of the EDR, vehicle manufacturers may record even more data than is specified within regulations. Importantly, an EDR may record data even if no airbags were deployed.

While the United States was the first jurisdiction to regulate EDR implementation, other jurisdictions including the European Union and China are currently developing their own regulations surrounding passenger vehicle EDRs. Currently, it is unknown if any legislation globally specifically prohibits the inclusion of an EDR in a passenger vehicle by a manufacturer, nor any requirement stating the recorded data be secured in a way that would prevent retrieval by parties other than the manufacturer.

While vehicle manufacturers have always maintained the ability to retrieve EDR data from their own vehicles, in the early 2000s General Motors and Vetronix (now Bosch) formed the concept of a retrieval tool, which would be publicly available, serving the needs of manufacturers and key stakeholders within law enforcement and the accident reconstruction industry. The Bosch crash data retrieval (CDR) tool has since become the leading publicly available tool and is now supported by 55 marques worldwide. Other manufacturers have made their own tools available for public purchase as well.

Data retrieval is a simple process, with the EDR being accessed either in-vehicle, via a functioning diagnostic link connection (DLC), or if the vehicle is too badly damaged from the crash, the module containing the supported EDR can be removed and downloaded directly using a cable between the download interface and the EDR itself.

The data recorded by an EDR can be invaluable to aiding the reconstruction of a motor vehicle accident and understanding vehicle, environmental, and driver behavioral factors which may have contributed to the cause of a crash. Witness statements and testimony can be effectively and efficiently verified or challenged when EDR data is used appropriately in conjunction with physical evidence from an accident scene.

While retrieving EDR data is a simple process, understanding and interpreting the data requires knowledge and skills which must be learned and developed. Each vehicle manufacturer will have a set of data limitations, which are presented with each retrieved data sample. Failure of the user to understand and appreciate these limitations can result in inappropriate or incorrect conclusions being drawn from the retrieved data. EDR data is also now widely accepted as valuable evidence in criminal and civil litigation proceedings in many global jurisdictions.

As passenger vehicle technology continues to develop at an ever-increasing pace, event data recorders (EDR) remain a vital cornerstone of this development. As the industry moves towards fully autonomous driving capabilities, the need to record data so that manufacturers, insurers, accident reconstruction professionals, and law enforcement can understand how and why a vehicle exhibited a particular performance characteristic is becoming increasingly vital. 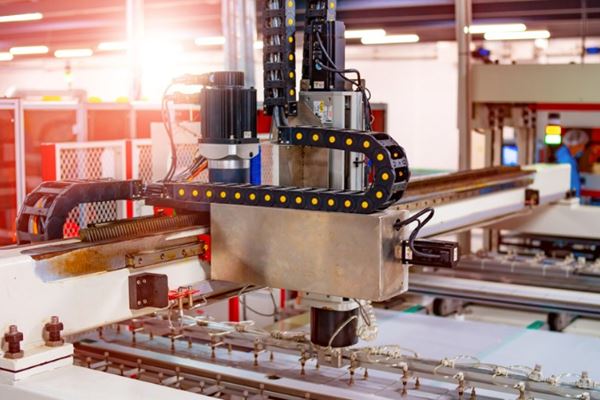 Operations Shut Down: Impact on Equipment During COVID-19 Unplanned shutdowns can cause significant issues with critical equipment such as computer servers, machinery, HVAC equipment, and motors unless they are... 17 abril 2020
¿Como podemos ayudarle?