Rain, sleet, hail, or snow may not stop your mailman from delivering your mail, but what about earthquakes, tsunamis, or wildfires? Depending on where you live, you are at risk for different natural disasters. Click on our Interactive Map above to see how your state fairs according to the natural disasters above.

The types of natural disasters and severe weather you should prepare for depends on in what region of the United States you live. For example, Californians should be well-versed in how to prepare for and deal with earthquakes, extreme heat, drought, wildfires, and, for coastal Californians, tsunamis. However, Californians can rest easy knowing they're unlikely to experience hurricanes, winter storms, tornadoes, or thunderstorms.

In general, the West Coast can count on avoiding hurricanes and tornadoes. Seattle has never had a documented hurricane since the northwestern Pacific Ocean isn't known for tropical storm activity. Similarly, Portland, Oregon has the second-lowest tornado density in the country. Tornadoes are much more likely to happen in Great Plains states, such as Oklahoma, or the Southeastern area, such as Florida. Meanwhile, the only areas of the country that have a high risk of hurricanes are coastal cities in the southeast and east, most notably New Orleans, which is surrounded by water on three sides and actually sits below sea level.

When winter strikes, the northern half of the continental United States should dig out their down jackets and ice scrapers. Cities such as Chicago, IL and Buffalo, NY are notorious for their devastating winters, and both can blame their winter troubles on their proximity to lakes. Chicago's winter storms are determined by Lake Michigan and Buffalo has an exceptionally long winter because it's also near the Great Lakes. Meanwhile, many Californians and residents of the southwest think "bundling up" means donning a light jacket and jeans. San Francisco has only had six documented snowfalls of one inch or more in the last 150 years, while Phoenix only averages one day below freezing each year.

Denver's high elevation makes it an unlikely candidate for a flood. However, most of Colorado is at high risk for droughts. Santa Fe, which typically has very low precipitation levels, also doesn't usually experience flooding. On the other hand, both New Orleans as well as New York City are at risk for a number of disasters due to their "island" style geography.

Chances are that no matter where you live, you're at some risk for some severe weather. However, you can quickly recover from natural disasters by being prepared and knowing what to expect from your region's weather. 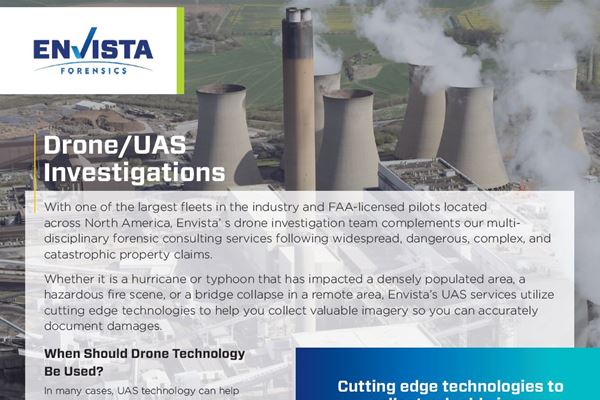 Drone/UAS Investigations Whether it is a hurricane or typhoon that has impacted a densely populated area, a hazardous fire scene, or a bridge collapse in a remote area, Envista’s UAS... 02 March 2022
How Can We Help You?