A large shipment of more than 4,000 fast-food drive-through signs shipped from China to Chicago. The signs travelled first to California, and then to a warehouse in Texas, by rail, before arriving in Chicago. When the enclosures reached Texas, the packaging wooden pallets, upon which the signs shipped, displayed visible signs of mould growth. The insured made the multi-million dollar decision that decontamination of the signs was necessary, and rented a warehouse where decontamination took place.

In response to the claim, the carrier hired Envista to help determine the cause of the mould and the time at which the mould occurred. Envista utilized a New Zealand expert who specializes in deterioration of wood, as well as mould generation, so he was quickly able to identify the means of contamination.

While Envista was assessing the information involved in the claim, the client's lawyer wanted us to perform an inspection of the warehouse where the cargo was unloaded. One of our engineers went to the warehouse and met with the insured. Some of the documentation provided was in Chinese, so we enlisted the help of another engineer on staff in Singapore to provide translation of these crucial documents.

After our analysis was completed, we found that the mould generation was not from the shipment, but rather from the signs being in contact with the wooden pallets. Envista's engineers proved the pallets were pre-infected lumber, and the type of mould actually began in China when the pallets were not properly heat treated at the time of manufacture. Since the generation of mould originated before the shipment, it was not part of the policy coverage period.

In this case, Envista utilized resources to assist this carrier in a myriad of ways, and on a global scale, with experts from Australia, New Zealand, Singapore and Texas, to come to a valid and quick conclusion.

A Chartered Professional mechanical engineer with over 17 years of engineering experience ranging from the purely theoretical to the empirical, Mr. Marco Soto has converted his early career experience in semiconductor R&D and medical device design into the foundations for investigations into equipment losses.

Learn More About Marco
Back to the Knowledge Center

Marine Engine Failure from Arcing? Envista Forensics was retained as an independent third-party engineer, representing the owner of the ferry, tasked to determine the scope, extent of damage,... 15 July 2022
Brochure 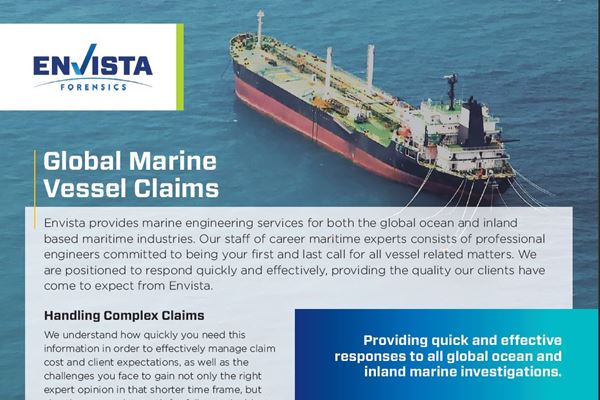 Global Marine Vessel Claims Envista provides marine engineering services for both the global ocean and inland based maritime industries. Our staff of career maritime experts consists of... 30 March 2022
How Can We Help You?