Rectifying Property Damage After a Fire

Successful fire investigations significantly reduce business interruption by rapidly identifying the severity of structural damage and how best to repair in the most efficient way possible. The first impression of a fire loss is typically one of devastation, especially when the structure is likely to collapse, as shown in the image below; but more often, the building superstructure can be repaired despite damaged fittings and fixtures producing a scene that might suggest otherwise.

Once the building is established as safe, equipment and plant may be inspected, and plans established for either their safe in-situ repair or their removal for replacement or repair are to be phased alongside structural repairs.

Examining debris can be a useful way of indirectly assessing the likely temperature-duration profile experienced by the surrounding parts of the building structure or the equipment it contains. However, a more reliable method of assessing the severity of damage is based on direct examinations of the response of each part of the structure and requires knowledge of material science, including metallurgy.

Structural engineering experts, working collaboratively with the insured to assess the nature and extent of the damage, can provide essential information on the time, cost, and engineering required to carry out the appropriate reinstatement.  This maximizes the speed of recovery and minimizes business interruption.

Replacing fire-affected steel members that are deformed beyond their original tolerances is often most appropriate. It is rarely cost-effective to remove, straighten, or reinstall deformed steelwork or to carry out sufficient material testing, analysis, design, and structural modifications to enable the repaired structure to accommodate them.

Replacing deformed steelwork is supported by metallurgical science. Although consideration is made on a case-by-case basis, the temperature required to degrade mechanical properties is higher than the temperature that causes softening and deformations.

In most cases, if a steel member is not deformed, it is not damaged. Any steel member that is deformed should be replaced, irrespective of the temperature it experienced during the fire.

Sagging steelwork softened during the fire. This structure required replacement. 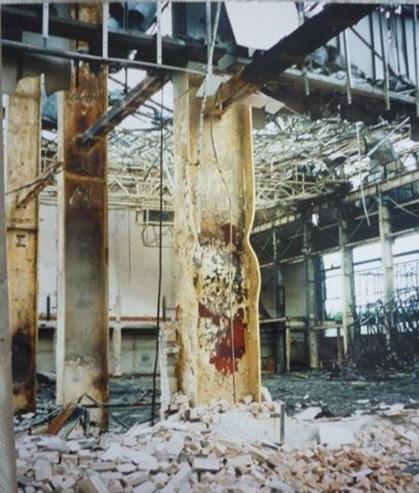 Most steel used in the construction of contemporary buildings, bridges, etc. is hot-rolled and low-carbon (less than 0.25%), which is referred to as non-alloy steel in Europe and low alloy steel in the U.S. This kind of steel contains small quantities of elements other than iron and carbon, some by default, others by design. This is done to aid in manufacturing and improve the mechanical properties by allowing unwanted elements to be removed from the steel or by lessening the impact of dislocations– imperfections within its crystalline microstructure.

Steel is not a perfect material, there are many missing atoms (dislocations) within the otherwise regular arrangement of atoms in its microscopic structure.  During manufacturing, as steel cools, some of the above trace elements are present to promote the formation of small crystals. The size alone limits the extent of possible movement of the dislocations. Other trace elements impede the movement of dislocations by occupying either the dislocations or the crystal structure that surrounds them.

Atoms vibrate, and as the steel is heated during a fire, they vibrate more energetically. Eventually, at relatively low temperatures, the atoms are sufficiently energetic that the bond between atoms adjacent to a dislocation is broken. Though, another is quickly reformed with neighbouring atoms. This allows the dislocations to displace and results in the deformation of the steel.

The process of softening and deforming associated with the movement of dislocations begins at temperatures much lower than the temperature at which the steel can begin to phase-transform (back to austenite at circa 723°C).

The possibility that steel might have experienced a transformation to austenite is often a cause of concern. Succinctly, this is because the change in crystalline structure and the arrangement of atoms within steel at this elevated temperature can, among other things, cause an unwanted redistribution or removal of those trace elements that are responsible for the original improved mechanical properties. Due to this, the mechanical properties of some steels may be permanently degraded by extreme temperatures.

However, deformations govern. If the steelwork is not deformed beyond its original tolerances, the temperature it experienced during the fire was not sufficient to promote excessive movement of dislocations and thus, not sufficient to produce a temporary phase-transformation and degradation of its mechanical properties.

It is recognized that exceptions exist and will be considered on a case-by-case basis. However, the above guidelines minimize the required amount of sampling and testing allowing fire investigators to quickly develop plans for fast-track recovery. Testing, therefore, confirms both the above rules of thumb and the efficacy of the proposed remedial works.

Structural engineers experienced in inspecting and repairing fire-damaged concrete properties immediately identify the presence of either sloughing-off spalling or explosive spalling as they begin their inspection of the severity of damage and how to relate these observations to the temperature that caused them.

Sloughing-off spalling (left image) and explosive spalling (right image) are very different from each other, requiring the engineer to understand what each indicates about how the fire affected the steel reinforcement and what should be the most appropriate repair works.

Sloughing-off spalling is associated with normal strength concrete subjected to long-duration high temperatures. The concrete is of a noticeably changed colour and surface texture and emits a hollow sound when struck lightly with a hammer. In this case, it is very likely that temperatures have penetrated the concrete as far as the steel reinforcement, possibly sufficient to cause degradation of their mechanical properties.

Explosive spalling is associated with low permeability and typically high-strength concrete. It occurs because near-surface water trapped within the concrete turns to steam when heated to relatively low temperatures and tries to expand. Being of low permeability, these internal pressures cannot quickly dissipate. This results in shallow-depth eruptions of the concrete that continue for as long as the fire lasts. Laboratory tests indicate this phenomenon is accompanied by recognisable sounds of muffled explosions.

Often, as shown in the right image above, the steel reinforcement may become exposed and detached, even if the remaining concrete is undamaged (except for a relatively thin surface layer). In each case, repairs may be extensive, although in the latter case, the reinforcement steel is often retainable.

Requiring only moderate temperatures to cause explosive spalling, it is often found that the residual concrete may not be significantly damaged, or at most, only a relatively thin surface layer is degraded and requires breaking off. The extent of break-off is more likely to be governed by the need to create a sufficient space behind the reinforcement so that a strong bond can be achieved between the new concrete, the residual concrete, and the reinforcement steel.  Consequently, it is necessary to take only a small number of concrete cores for laboratory examination to establish that the depth of break-off throughout the building exceeds the thickness of the surface zone of degradation and allows for a bond of the reinstated concrete.

The response of regular structural steel to a fire directly reveals the severity of damage. Although requiring consideration on a case-by-case basis, it is best practice to replace only that steelwork that is deformed beyond its original tolerances. Although it is prudent to replace bolts within fire-affected parts, since thermal expansion effects may have caused undesirable stresses, any steelwork that is not deformed is very unlikely to have been damaged by excessive temperature. It is not necessary to carry out more than a small number of confirmatory tests to demonstrate that mechanical properties are unaffected. Any steelwork that is deformed should be replaced. If one replaces deformed steel, one will also have replaced any steel that may be suspect.

The response of structural concrete to a fire also directly reveals the severity of damage and how this is influenced by the permeability of the concrete.  It is not necessary to take more than a minimum number of concrete cores for laboratory evaluation.  Engineers should consider categorizing the repairs, not the damage, so that testing can be minimized to that which verifies the efficacy of the repair.

For all structures, an expert can lessen the extent of testing necessary to verify the appropriateness of the repairs. Fast-track recovery may then be achieved, minimizing business interruption.

Taking the Complexity out of Complex Losses As the name implies, “complex” or “major” losses require experts and litigation professionals with the knowledge and experience to efficiently complete the... 21 October 2021
How Can We Help You?